A stroll through Kassel

Distance / Duration: approx. 3 km / 40 min. (without a visit to the exhibition sites)

This walk takes you through Kassel’s city center that boasts historic buildings, large and small cultural institutions, stores and shopping galleries, as well as the extensive park landscape of the Karlsaue. After the severe destruction inflicted by the Second World War, Kassel’s cityscape is marked by many examples of 1950s and 1960s reconstruction.

The walk is partially suitable for wheelchairs: The Frankfurter Straße/Fünffensterstraße underpass has an approx. 12% incline, assistance staff are on hand to help. At Hotel Hessenland ground-level access is not available across all areas while the Perle bar is partially wheelchair accessible. 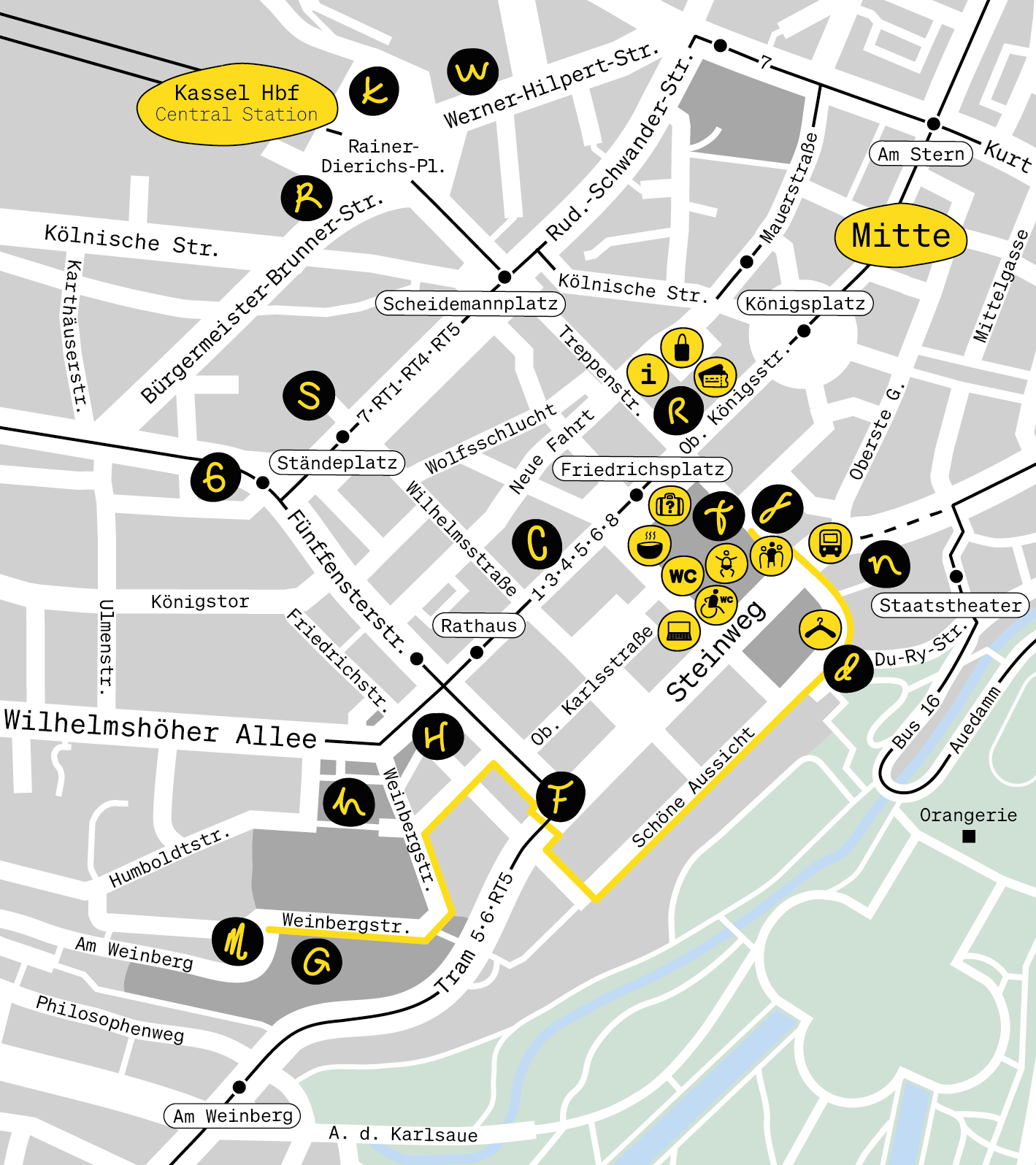 The Fridericianum Museum is closely intertwined with the development of the European idea of the museum, with representation and enlightenment. It was opened in 1779 to make the princely collections accessible to the public. That period saw the transfer of the collections into public ownership begin; the bourgeoisie embraced art as a medium of reflection, but also of representation and interpretive authority. Various conversions and uses of the building followed. Not until the post-war period did it become a venue dedicated solely to exhibitions. The first edition of the documenta in 1955 was still limited entirely to the Fridericianum Museum. Since then, the building has always been at the focal point of the exhibition series, as the core idea of each respective edition was often exemplified here.

ruangrupa and the artists inhabiting the Fridericianum see the building as a lumbung. lumbung is a practice of sharing, but also a form of architecture, a building where the harvest is usually stored. It is also a living space and meeting place for everyone.

Dan Perjovschi’s work on the columns of the Fridericianum introduces the central themes of documenta fifteen. Each pillar of the portico represents one of the lumbung values, such as generosity, local anchoring, independence, or humor. The way the work is presented already announces what is happening inside. The black columns with white symbols look like a blackboard reminding us of associative works in school or workshops.

The former exhibition building becomes the Fridskul: Fridericianum as a school. Under this heading, the artists and collectives present the various possibilities and models of horizontally oriented education. For this purpose, the collectives meet at regular intervals and jointly decide on the use of the rotunda, which also serves as the Fridskul library. The host for the Fridskul’s dedicated program is the collective Gudskul from Indonesia, of which ruangrupa is one of the founding members. Gudskul is organizing workshops and seminars, knowledge-sharing meetings, and karaoke nights with other collectives. On the ground floor of the building is a dormitory and kitchen. It is also home to RURUKIDS, an initiative founded by ruangrupa in 2010 enabling artists to work with children and young people.

Friedrichsplatz is located right in front of the Fridericianum. Built in the 18th century and named after Landgrave Friedrich II, the square is a location steeped in history. It remains one of Germany’s largest inner-city squares, imbibed with the monumental pomp of the Wilhelmine epoch as well as the marches of the Nazi era and the destruction and reconstruction after World War II.

Food Market: Located on the edge of Friedrichsplatz is the documenta fifteen Food Market with a wide range of vegetarian and vegan dishes. The gastronomic offering is based on certified organic food and drink from the region.

Route: From Friedrichsplatz, take the large, two-lane cobbled street towards Museum of Natural History Ottoneum as well as documenta Halle, which are about a 1-minute walk from the Fridericianum and located next to Staatstheater Kassel.

On the tour through the Museum of Natural History Ottoneum, you will find out about the human understanding of nature and see several exhibits that are famous in this city, such as the so-called “Goethe Elephant.” In Goethe’s day, an elephant did indeed live in the landgrave’s menagerie in the Karlsaue, and it died in an unfortunate fall. The Ottoneum is even older: it was the first permanent theater building in Germany in the early seventeenth century. Today, its museum also serves as a platform for discussions of the protection and preservation of the environment.

Flat roof, steel girders and a glass facade: documenta Halle by architects Jourdan & Müller is a typical example of the sober architectural style of the 1990s. It was built in 1992 as the first dedicated exhibition building for DOCUMENTA IX curated by Jan Hoet, erected in a postmodern-constructivist architectural style and conceived as a kind of “bridge” from the Staatstheater to the Karlsaue Park. In the documenta fifteen program it is rather an exception – its large, empty rooms with white walls, built following the European museum tradition for the purpose of presenting static works of art, are otherwise a bit of a rarity for visitors.

Route: From documenta Halle, continue to the underpass at Frankfurter Straße/Fünffensterstraße. A barrier-free pedestrian path and steps lead up to the street “Schöne Aussicht” which is located to the right of documenta Halle and the artwork Rahmenbau by Haus-Ruck-Co (documenta 6). Carry straight on past the Neue Galerie for about 12 min. and turn right at the end of the street into Frankfurter Straße where the entrance to the underpass is on the right.

Typical for the post-war period: In order to create more space for cars, pedestrian zones were banished to the underground from the 1950s on. The underpass at the junction of Fünffensterstraße and Frankfurter Straße is a good example of the misguided urban planning of that time. Colorful tiles do nothing to improve the dreariness of the tunnel, which is illuminated at night, but pedestrians are at least offered a safe footpath away from motor traffic.

Tip: Over coffee specialties and cake you have the chance to relax in the garden of the Perle bar at Hugenottenhaus. The bar is located at Friedrichsstraße 25, 34117 Kassel about 5 min. from the underpass.

Route: Walk back towards Frankfurter Str. and after 80 m turn right into Obere Karlsstraße, then left into Weinbergstraße until you reach Grimmwelt Kassel. 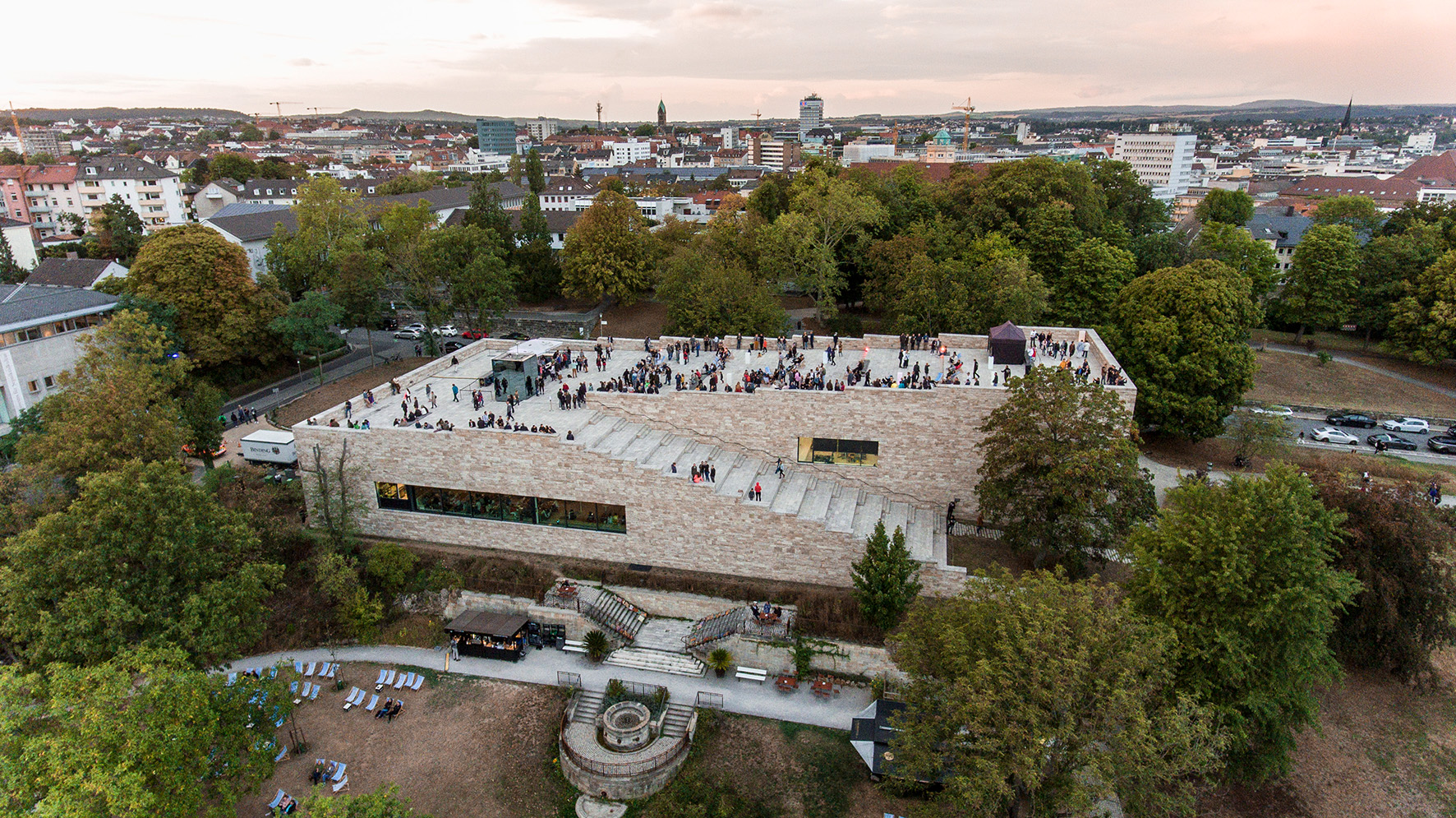 Grimmwelt Kassel is a multi-layered location where, as in German folk tales, the beautiful and the terrible sit side by side. Today, the linguists and folklorists Jacob and Wilhelm Grimm cannot really be appreciated fully because of the anti-Semitic statements found especially in their diaries and letters. Ambivalent feelings are also triggered by the location: Opened in 2015 the house stands on the inner-city vineyard on the ruins of the Henschel Villa, which was destroyed in World War II. The firm Henschel & Sohn built locomotives and armaments in both world wars and was a key supplier for the Nazi regime.

Grimmwelt Kassel explicitly sees itself not as a museum, but as an exhibition venue or walk-in sculpture. Visitors can lose themselves here in the labyrinth of the German language, which Jacob and Wilhelm Grimm wanted to make easier to “walk through” with their dictionary.

Route: 100 m to the left of Grimmwelt Kassel is the Museum of Sepulchral Culture.

In the Museum of Sepulchral Culture, Kassel boasts an unusual institution that delves into the culture of dying, mourning, commemoration, and burial. The permanent exhibition features artifacts of sepulchral culture, primarily from German-speaking countries, from the Middle Ages to the present day. As if entering a crypt, visitors encounter coffins, hearses, mourning attire, mourning jewelry, gravestones, and grave sculptures in the basement.

Route: Head back on the left-hand side of Weinbergstraße and cut straight through Fürstengarten towards the city center (northeast). Across the street turn left into Weinbergsstraße and walk to Wilhelmshöher Allee. There turn left and at the next corner is Hotel Hessenland.

Hotel Hessenland was designed in 1951 by Paul Bode, brother of documenta founder Arnold Bode, for the ruined inner-city site next to the Hugenottenhaus. Behind the unadorned gray facade is an example of listed 1950s architecture with an elegant lobby complete with sweeping staircase and a ballroom able to seat around 800 people in its heyday.

The hall has not been used since the 1990s and the hotel (including an originally furnished 1950s room) stood empty for about a year until documenta fifteen brought it back to life: as a guest house for the artists, the ballroom as an exhibition space for MADEYOULOOK.

Route back to ruruHaus: From Hotel Hessenland, walk straight ahead along Obere Königsstraße until you see ruruHaus on your left.