After he graduated from theater faculty at the Jakarta Institute of Arts, Agus returned to his hometown Weh Island (Aceh, Sumatra) to research and study the art of Acehnese storytelling known as PMTOH. In 1992 he began to perform his theatrical style monologue which he also calls PMTOH, and staged the plays Anak Emak Searching for Eggs, Tale of General Puyer Bintang Tujoeh, Police and Bandits, Tale of the Faithful Ring, Ma Liang the magic brush, and The Story of Panca Tantra. He performed at different places in Indonesia on various issues like politics, disaster, and rural public health.

Agus is also involved in community empowerment activities, having joined the Anti-Violence Community in handling student brawls in 1999-2002 in Jakarta. From 2003 until now, he works with Komunitas Tikar Pandan community for trauma healing and peace building projects in Banda Aceh. Since 2005, he has used his self-created TV Eng Ong as a small stage and was also screened in the National TV.

For documenta fifteen, Agus creates a series of storytelling sessions at Grimmwelt Kassel based on the Sundanese life principle, Tri Tangtu. The storytelling workshop sessions are conducted with schoolchildren from the Friedrich Wöhler Schule and Reformschule in Kassel. Tri Tangtu represents a vernacular thought system in which the mystical, rational, and natural intersect with each other and serve as the basis to guide the relational position of humans with other inhabitants of Earth. Central to storytelling is the joy of just being and interacting with many people: remembering the past, thinking about the present, and speculating about futures. 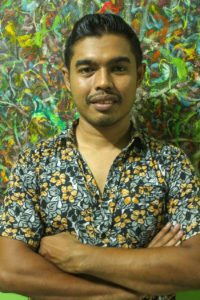