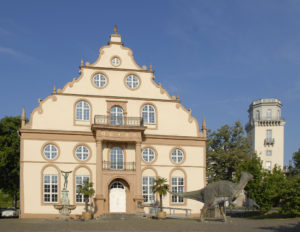 On the tour through the Museum of Natural History Ottoneum, you will find out about the human understanding of nature and see several exhibits that are famous in this city, such as the so-called “Goethe Elephant.” In Goethe’s day, an elephant did indeed live in the landgrave’s menagerie in the Karlsaue, and it died in an unfortunate fall. The Ottoneum is even older: it was the first permanent theater building in Germany in the early seventeenth century. Today, its museum also serves as a platform for discussions of the protection and preservation of the environment.

The Korean visual research collective ikkibawiKrrr sought out this place because it is dedicated to the diverse connections between plants and human beings, civilization and natural phenomena, colonialism and ecology. The Korean word ikkibawi means a rock with moss growing on it; Krrr is an onomatopoetic word. In its installation, the collective works with seaweed, which, especially during the war, was used in many ways: for example, for food but also to produce weapons. INLAND’s work on art, territories, and social change is also present at Ottoneum, where the collective develops a collaboration with the museum’s scientific team, cultivating the Ottoneum’s garden to create new habitats to host a diversity of insects, flora, amphibians, and other beings.

Following diverse educational projects INLAND carried out during the last decade, such as the Shepherds School and the New Curriculum, the collective has developed the INLAND Academy, supported by documenta fifteen and NA!Project, with a series of public events and conferences happening on site. The exhibition at Ottoneum functions as a Folk Un-Museum, INLAND Academy syllabus, and learning space, which brings together materials, ongoing projects, and collaborations. For example, the Cheese Pavillion with the Schmackes local organic food project, the collaborations with Fundación Marso, who works with Rarámuri weavers and pastoralists in Northern Mexico, or the Bee Flag with local beekeeper Michael Hertweck.

Access:
The main entrance of the old building is accessible via a visible ramp. All exhibition rooms and passageways are wheelchair accessible. There is an additional manual ramp at the entrance.

Bathrooms:
In the basement there is a barrier-free restroom, which can be reached with an elevator (110 x 140 cm).

Potential barriers:
The dark passageways as well as entrances to the film rooms may cause orientation difficulties for some visitors.

Parking:
You can find a detailed map of the city of Kassel here (in German language). Selection in the topic layer “Themen-Layer”: Verkehr & Mobilität + Behindertenparkplätze