MADEYOULOOK is a Johannesburg-based interdisciplinary artist collaboration between Molemo Moiloa and Nare Mokgotho. The works of MADEYOULOOK take as their point of departure everyday Black practices that have either been historically overlooked or deemed inconsequential.

These works encourage a re-observation of, and de-familiarization with, the everyday in urban South African life. In reworking and interrupting how we view ordinary Black lived experiences, we are “made to look” and question societal relations. Since 2009, the works of MADEYOULOOK have considered subjects such as models of memorialization of histories and oral traditions, Black love and urban public space, forms and hierarchies of knowledge creation and dissemination, and the socialities of land and relationships with plant life.

MADEYOULOOK engage different approaches focused primarily on intertextual installations, gatherings, discursive programs, research, and publishing. Although MADEYOULOOK’s practice is significantly directed towards a practice of socialities and relationalities outside of the gallery space, these projects occasionally culminate in exhibitions.

For documenta fifteen, MADEYOULOOK emphasize spatiality: how we manage space, and how space manages us. Their project is a terraformation: a modification of a surface to rethink and re-experience how we inhabit the world. MADEYOULOOK produce an undulating floor made of variable shifting heights, an anti-ergonomic exercise that refuses efficiency and comfort, that activates discomfort or unease as a trigger to re-evaluate the body’s complacency. Moiloa and Mokgotho seek to “interrupt” a perverse economy, designed to render Black life aberrant.

MADEYOULOOK have exhibited, published, and hosted programs in various forms, including with Njelele Art Station, Harare; Frac des Pays de la Loire, Carquefou; Kunsthal KAdE, Amersfoort; Primary, Nottingham; and various initiatives in South Africa. They were nominated for the Vera List Center Prize for Art and Politics at the New School, New York, in 2017, and the MTN New Contemporaries Award in 2012.

Another World is Plantable – Film Screening 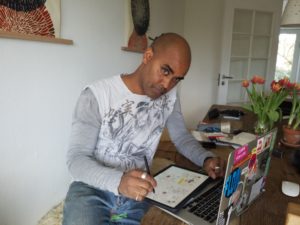