The Instituto de Artivismo Hannah Arendt (INSTAR, Havana) emerged as an institution for civic literacy in 2015, from an artistic intervention organized by the Cuban artivist Tania Bruguera where people read and discussed Hannah Arendt’s book The Origins of Totalitarianism for one hundred hours.

INSTAR, "Art to the limit". Workshop with the theoretician Brian Holmes and the artist Claire Pentecost, Havana, 2017, Photo: INSTAR

Since its inception, INSTAR has been thought of as a democratic and horizontal space, where decisions are made by consensus. “We are interested in claiming social justice and rights sometimes alien to the Cuban context, such as fair wages, a working environment that is maternity friendly, supporting independent projects and artists, respect for freedom of expression, and building a project with people who think differently but want to make a country for everyone,” INSTAR say about their work. INSTAR is a safe space that protects and connects other organizations, activists, and artists — acting like a living organism that breathes, feels, reacts, and has a memory.

INSTAR offer workshops to strengthen the capacities of artists, intellectuals, activists and other groups and individuals. They provide financial support for creators, associations, and independent projects through prizes and scholarships. In an attempt to reconstruct the history of creative production, art, and independent activism, they rescue files and make them available to the public, free of charge.

ZK/U – Center for Arts and Urbanistics 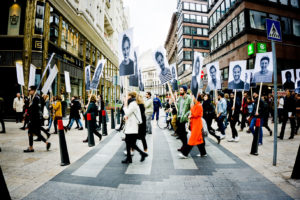