The Nest Collective is a multidisciplinary arts collective living and working in Nairobi. Founded in 2012, the Nest Collective has created works in film, music, fashion, visual arts and literature such as the critically-acclaimed queer anthology film Stories of Our Lives, which has so far screened in over 80 countries and won numerous awards. The Nest Collective also founded HEVA—Africa’s first creative business fund of its kind—to strengthen the livelihoods of East Africa’s creative entrepreneurs.

The Nest Collective uses an applied-research-based, holistic methodology to produce work in film, fashion, literature and other media. These interventions are designed to engage audiences using multiple points of entry and reflection, thus enabling nuanced consideration, discussion of the issues raised, while also advancing aesthetic and artistic value. Their work usually finds multiple platforms, spaces and audiences, including academia, other cultural practitioners, civil society, and young people in urban spaces.

Hailing from Nairobi, The Nest Collective is primarily concerned with African urban and contemporary experiences, using them as points of entry for an inquiry into their own histories and for reflections about possible futures. Although their work often responds to and is aware of interconnected issues on a global scale, the collective primarily addresses Kenyan young men and women. Nevertheless, they are excited when their work speaks to other audiences as well.

May Asphalt issue: “Chasing the Sunset” 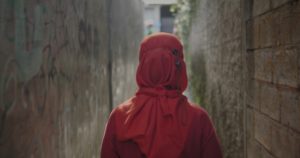