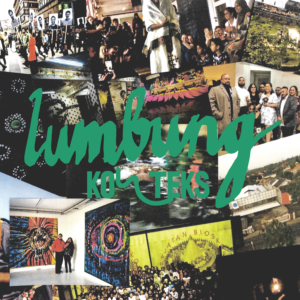 lumbung konteks is a seven-part series of online conversations, taking place on the first Sunday of each month until June 2022. Each session invites two documenta fifteen lumbung members to introduce their practices and wider ecosystems and to expand and reflect on each other’s work.  Through sharing stories, songs, and tools for living and working in community, the lumbung members discuss the differences and affinities between their contexts. lumbung konteks addresses the importance of the localities within which we all work, the conditions that inform and ground our practices, and the ways we can learn from each other’s models of education, ecology, and economy.

In the fourth episode of the series, lumbung members OFF-Biennale Budapest and Instituto de Artivismo Hannah Arendt (INSTAR) in conversation with Miguel A. López and ​​Vasyl Cherepanyn, will discuss their support of art practice and cultural work as civic engagement. Drawing from their respective social contexts, both lumbung members share and exchange tactics and ways of collectively navigating and resisting nation state building narratives, and state funding structures.

The OFF-Biennale Budapest started in 2015 as a grassroots statement project that was to testify to the independence, resilience, and capability of the local art scene. Started and sustained by a handful of art professionals, the one-time event has since turned into an independent platform where art engages with pressing issues, and the underlying dialogues and collaborations of artists, curators, researchers, students, and various civil groups and organizations can be nurtured and promoted on a local as well as international level. OFF has never applied for Hungarian public funding and steered clear of state-run art institutions — a policy that, while it counters the project’s principles of cooperation, sharing, and serving the common good, is still deemed necessary in order to preserve freedom of expression and professional integrity. The third OFF-Biennale took place from April 23 until May 30, 2021.

The Instituto de Artivismo Hannah Arendt (INSTAR) emerged as an institution for civic literacy in 2015, from an artistic intervention organized by the Cuban artivist Tania Bruguera where people read and discussed Hannah Arendt’s book The Origins of Totalitarianism for one hundred hours. Since its inception, INSTAR has been thought of as a democratic and horizontal space, where decisions are made by consensus. “We are interested in claiming social justice and rights sometimes alien to the Cuban context, such as fair wages, a working environment that is maternity friendly, supporting independent projects and artists, respect for freedom of expression, and building a project with people who think differently but want to make a country for everyone,” INSTAR say about their work. INSTAR is a safe space that protects and connects other organizations, activists, and artists — acting like a living organism that breathes, feels, reacts, and has a memory. INSTAR offer workshops to strengthen the capacities of artists, intellectuals, activists and other groups and individuals. They provide financial support for creators, associations, and independent projects through prizes and scholarships. In an attempt to reconstruct the history of creative production, art, and independent activism, they rescue files and make them available to the public, free of charge.

Miguel A. López is a writer, researcher, and curator. His work investigates collaborative dynamics and feminist re-articulations of art and culture in recent decades. From 2015 to 2020, López was the chief curator, and later co-director of TEOR/éTica in Costa Rica, a non-profit, independent art space dedicated to contemporary art from Central America and the Caribbean. He was the curator of the retrospective exhibition Cecilia Vicuña. Seehearing the Enlightened Failure at Witte de With (now Kunstinstituut Melly), Rotterdam, 2019, which traveled to Mexico City, Madrid, and more recently to Bogotá where it opened in February 2022. López is author of Ficciones disidentes en la tierra de la misoginia (Dissident Fictions in the Land of Misogyny, Pesopluma, 2019). He lives and works in Lima, Peru.

Vasyl Cherepanyn is Head of the Visual Culture Research Center (VCRC), Kyiv). He holds a PhD in philosophy (aesthetics) and has lectured at University of Kyiv-Mohyla Academy, European University Viadrina in Frankfurt (Oder), University of Helsinki, Free University of Berlin, Merz Akademie in Stuttgart, University of Vienna, Institute for Advanced Studies of the Political Critique in Warsaw, and Greifswald University. Cherepanyn was a visiting fellow at the Institute for Human Sciences in Vienna. He co-edited Guidebook of The Kyiv International (Medusa Books, 2018) and ’68 NOW (Archive Books, 2019) and curated The European International (Rijksakademie van beeldende kunsten, Amsterdam) and Hybrid Peace (Stroom, The Hague) projects. VCRC is the organizer of the Kyiv Biennial (The School of Kyiv, 2015; The Kyiv International, 2017; Black Cloud, 2019; Allied, 2021) and a founding member of the East Europe Biennial Alliance. VCRC has received the European Cultural Foundation’s Princess Margriet Award for Culture in 2015, and the Igor Zabel Award Grant for Culture and Theory 2018.

Lilian Astrid Geese is a conference interpreter based in Berlin.

The recording of the conversation will be available on documenta fifteen’s YouTube channel shortly after.

In English with simultaneous translation into German language and International Sign.

Listening to The Land, The Land itself, Sunday, December 5, 2021

This digital event takes place in English with simultanoeus translation into German language and International Sign.

Cossacks in Cuba: The Soviet visual legacy in Cuban art

The necessity of peacebuilding work