Chimurenga is a project-based mutable object, workspace, and pan-African platform for editorial activities. Founded by Ntone Edjabe in Cape Town in 2002, it makes space for ideas and reflection by Africans about Africa. The aim of their activities is not just to produce new knowledge, but to express the intensities of our world, to capture those forces, and to take action.

Chimurenga’s outputs include a broadsheet titled The Chronic; The Chimurenga Library; African Cities Reader; and the Pan African Space Station (PASS). The Chronic is a gazette born of an urgent need to write our world differently, to begin asking new questions, and old ones anew. The Chimurenga Library is an ongoing intervention into knowledge production and an archive that seeks to re-imagine the library as a laboratory for curiosity, new adventures, critical thinking, daydreaming, socio-political involvement, partying, or just random perusal. The library and archive can be investigated as both conceptual and physical spaces in which memories are preserved, history is written, and both are reactivated. African Cities Reader is a biennial publication that brings together contributors from across Africa and the world to challenge the prevailing depiction of urban life on the continent and redefine “cityness,” Africa-style. It is a joint creation of Chimurenga and the African Centre for Cities at the University of Cape Town. Founded in 2008 by Chimurenga in collaboration with musician and composer Neo Muyanga, the Pan African Space Station (PASS) is a periodic, pop-up live radio studio, a performance and exhibition space, a research platform and living archive, as well as an ongoing, internet-based radio station.

For documenta fifteen, Chimurenga has developed a new season of its radio program, Radio Freedom, which the collective streams for five days from Dar es Salaam, Tanzania. The program is part of Chimurenga’s ongoing enquiry on knowledge production via African sound worlds, and long-term research on broadcasting and cultural initiatives by liberation movements across the continent. The research focuses on the city-studios of Cairo, Accra, Conakry, Algiers, Lusaka, and Dar es Salaam: revolutionary capitals which hosted and disseminated anti-colonial radio broadcasts through their own national infrastructure. The chapter of Radio Freedom, which follows Cairo in 2018, focuses on the anti-apartheid struggle in Southern Africa, and features artists and collectives from across the region. Contributors reactivate the broadcasting liberation archive of their country, and collaboratively reimagine the programing of stations such as ANC’s Radio Freedom, MPLA’s Angola Combatante, SWAPO’s Voice of Namibia, FRELIMO’s A Voz da FRELIMO, and many more. Just like the Radio Tanzania of old, which hosted broadcasting by liberation movements from across Southern Africa during the 1960s and 1970s, Radio Freedom presents transnational and multi-lingual programming that challenges territorial and cultural borders. Chimurenga intervenes in the soundscape of Kassel through the broadcasting of Radio Freedom via Freies Radio Kassel (Free Radio Kassel) and other local non-commercial stations, as well as through sound systems at undisclosed venues around the Am Stern public square. 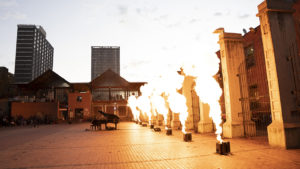