Sakuliu was born in the ancient founding village, Parilayan, of the Paiwan, an Austronesian speaking indigenous people of southern Taiwan. In Paiwan language, his name means “arrowhead,” with the further connotation of “step forward, think in depth and plan carefully.” 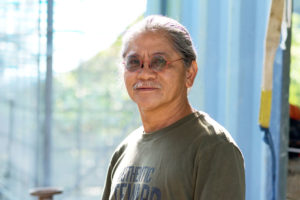 His house name, Pavavalung, meaning “the sound of seeds growing in the soil”, is regarded by villagers as a malang family, literally “the disseminator of beauties”. With the sense of mission that his names bestow on him, his aspiration is not only to create the crafts expected of men of a pulima family – a family whose members are highly skilled in arts and crafts – but also to think as a puqulu, or wise person. Sakuliu is determined, through practice, to bring about cultural revival and preservation. He describes himself as a water droplet that can nourish the land, just as knowledge nourishes the people.

Since the early 1980s, Sakuliu has carried out field research with the tribal elders to record their wisdom, and used painting to document the patterns and shapes of ancient ceramic pots, traditional costumes as well as other household items of Paiwan culture. He has also taught the young generation to build traditional slate houses and to use diverse materials to carve and create, with the prospects to pass down these cultural symbols and their spirit, embodying reflections on the encounter of traditional and modern culture.

Deeply concerned about the impact of foreign colonial powers that have taken turns to occupy the island, Sakuliu worries how the traditional Indigenous culture has been impacted from this and got lost. Hence, he has initiated the notion of Tribe School in an effort to build an ecosystem of traditional knowledge in order to launch ethnic awareness movements. In recent years, he has concentrated on researching Paiwan classical cosmology and has turned his study into published words and paintings.

Sakuliu won the National Culture and Arts Award in the fine arts category in 2018, as the first Indigenous person to garner this honor in Taiwan. He is invited to develop a solo exhibition for the Taiwan Pavilion at the 59th Venice Art Biennale in 2022.